I finished up the top of the tea cozy last week, working it just like the top of a hat.  This week I’ll start by working the spout opening the same way I would work the thumb on a mitten.  I transferred the 12 reserved stitches (saved on my stitch holder/safety pin) to my dpns, then picked up and knit 4 stitches in the little cast on edge.  I then worked a little 2×2 ribbed cuff around the spout and bound off.  Easy! 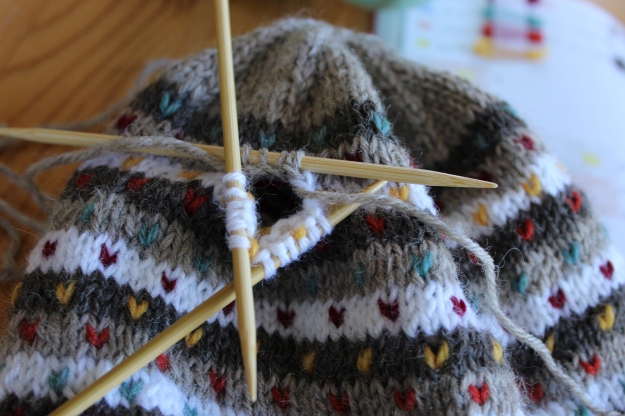 Then I sewed up the bottom of the handle hole (I still need a better name for that), so now it fits snugly on my tea pot without me having to safety-pin it in place.

But, you know what… It looks a little… sad?  Like it’s missing something.

So I made a nice, tight 2″ pompom with bits of all 7 colors and sewed it on top. 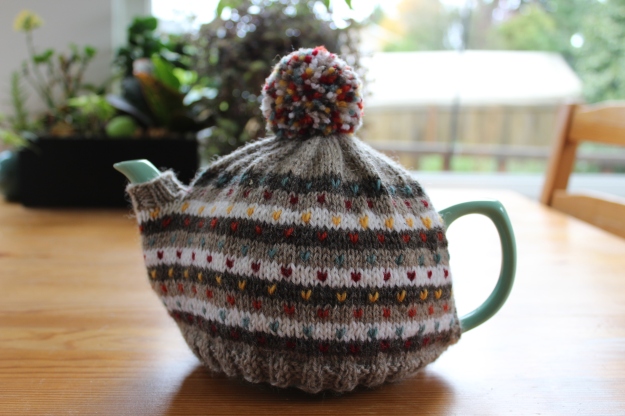 Perfect!  It’s all finished and ready to go out on its maiden tea voyage!  I can’t wait.

And, next week, I’ll write up the pattern in a nice finished form and you can make yourself a tea cozy!

My original idea was to make a gusset for the spout, in the same way that I would make a thumb on a mitten.  But then I cast on, started knitting, and promptly forgot about that.

So, I had a big rectangle of knitting that wrapped nicely around my teapot.  I knit it until it reached the split between the spout and the ‘body’ of the pot, in between two stripes (so I wouldn’t have to worry about making a hole and maintaining the colorwork pattern at the same time).  First I thought I would make a simple 8-stitch button hole, but that didn’t seem right.  I thought it would make the tea cozy pull funnily, and I want a little cuff around the spout of my tea cozy.  So, I decided to do a slight variation.

I knit to where I wanted the hole to be, then transferred 12 sts to a stitch holder, then I cast on 4 sts using a backwards-loop cast on, and knit the rest of the row.

The way I made the hole reduced my total stitch count by 8, so now I was working with 112 sts instead of 120, but that felt right to me. After all, I was going to decrease for the top of the cozy in a few inches.  I continued knitting, following the established pattern without any more shaping until I got to the top of the 10 colorwork repeats I had planned. 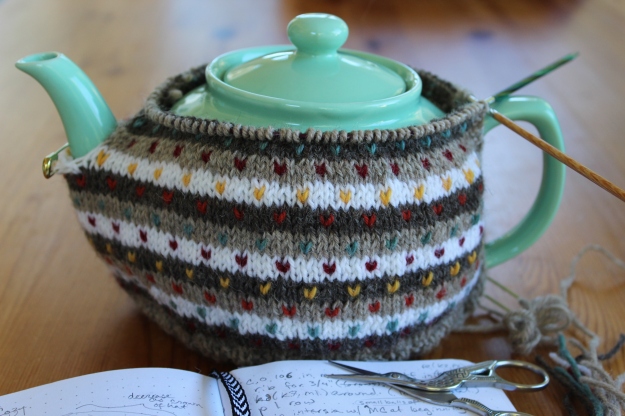 And, when i put the unfinished cozy on my tea pot, it fit surprisingly well!  I still have to seam it on the bottom and the top needs to be knit.  The spout hole fit really well, sure the safety pin is pulling a bit, but the when I knit up those stitches into a little cuff around the spout, I’m sure it’ll fit like a glove!