It’s time for a new sweater!  This one’s for my husband, and I’m not going to make it into a pattern or anything (which feels oddly luxurious- I guess I’ve been writing a too many patterns).

I actually ordered the yarn back in the fall, when the plan was to knit this sweater as a Christmas present.  Of course, things happened, and I ran out of time.  Isn’t that the way it goes?

Anyway, I ordered a bunch of skeins of KnitPicks Brava Worsted in Cobblestone Heather in their last big sale.

Now, this is a 100% acrylic yarn, which is not something that I would normally use to make a sweater.  But my husband picked it out.  He tends to run warm, and Seattle basically never gets below 40 degrees, so he refuses to wear anything with wool.   (OK, maybe I’m being dramatic. But the point still stands, he won’t wear wool.)

Brava seems like a decent alternative to wool.  It’s nice and soft and squishy, and actually has a bit of wool-like spring.  Unfortunately, it has a bit of that “acrylic sheen” to it, so I think it looks a little cheap- but that’s probably something that only a knitter would notice.

I’m thinking of doing either a crew-neck or a heneley sweater, top down (because I love me a good top-down sweater.  Seriously, if you’re even thinking of improvising your own sweater, try Ann Budd’s book Top-Down Sweaters.  It’s the best!).

I want to keep the sweater fairly plain (because that’s what my husband likes), stockinette, but featuring some subtle texture across the shoulders and chest.  Something like this: 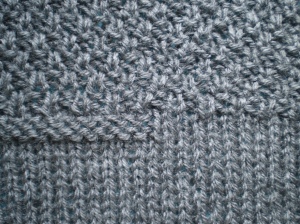 The top portion is a simple moss stitch, which I think would look good across the top part of a men’s sweater.  The bottom is just stockinette (so I can measure gauge).  In between, I tried a couple things to figure out the transition.  On the right, I just went straight from moss stitch to stockinette, and on the left, I added a couple rows of reverse stockinette.  I think I like the reverse stockinette stripe, I think it would add structure and a bit more visual interest to the sweater.

But I have a little time to figure it out before I get down to the transition point.

What do you think?

4 thoughts on “A New Sweater On My Needles”