I guess I’m keeping the Christmas in July theme going, even though it’s August, with a brand new stocking pattern from Knit Picks!

It’s a super simple stocking, knit in the round, with a short-row heel and an all-over knit-and-purl texture. I really like this stocking- it’s classic, simple, and would be beautiful in just about any color and would compliment just about any Christmas décor theme.

The Nordic Forest Stocking is one of a dozen (!) stocking patterns in the new collection from Knit Picks, and they’re a delight as always. Go grab yourself a copy and make one for everyone on your Nice List!

It’s early, as I write this from the past (ooohh!), but it’s never too early to be thinking about Christmas. Especially if you’ve got plans to knit for Christmas. And boy, howdy, do I have plans.

Just one. I’ve given up knitting Christmas gifts, because… well… it’s a lot of work, it’s stressful, and I just don’t wanna. Sure, I might make a pair of Christmas socks or a particularly special Christmas sweater from time to time, but I’m not doing the whole “everyone on my list gets a pair of mittens” thing this year. (And not just because we have a new member of the family this year.)

But I love a tradition, and one tradition we have is hanging stockings by the fireplace. We haven’t really filled them ever, but I love how they look, just as decorations, and I kind of love making them.

Plus, since our older kid and our dog both have stockings, it would probably be unfair if the baby was stocking-less.

So, I’ve dug the stockings out of storage, and re-ordered more Cascade 220 (thank goodness I actually kept the yarn tags from the last time I made a stocking, or I wouldn’t have had any idea about what shades of green and red to buy), and set to work knitting up a stocking for the little one.

Of course, I never took decent notes or wrote up an actual pattern, so I’m kind of guessing/using an old stocking as a general template. It’s simple enough for the leg of the stocking, but we’ll just have to see how it turns out… I really don’t remember how I did the heel…

And, while you read this, the baby will probably be born already (if there’s any justice in the world, anyway… I’m still a month+ out from my due date as I type this, and let’s just say, I’m ready to move on to the next phase of this thing), and should have a name. But, for now, I’m leaving the name blank, and will go in later with a little red yarn and duplicate-stitch in the letters.

It’s going to be so weird having 5 stockings hung up this year! (Assuming I can figure out the heel turn on this thing…)

Have you ever tried to re-create a project years after you made the first version? How did it go?

Buckle in, everyone.  It’s going to be a long one.  A tale of mystery! Suspense! Moths!

Several years ago, I knit up two lovely stockings for myself and my husband.  They were fabulous, squishy, Cascade 220 in carefully-selected  shades of evergreen, holly berry and cream.  Perfect Christmas colors.  The stockings were covered in Fair Isle color work from the cuff to the toe, and I even charted out and knit our names into the tops.  They were lovely and festive.

Last year, we were decorating the house, and I pulled out the stockings.  And horror of horrors– a silver-dollar-sized hole right in the top of my husband’s stocking.

I freaked out!  My heart pounded, and I felt sick to my stomach.  How could this happen? What was I supposed to do?  I had worked so hard on those stockings!  Now some bug had come along and ripped a gigantic hole right in the middle of his name!

I’ll admit- what happened next was not one of my smartest moments.  But I panicked.

And cut the whole top off the stocking.

Just pulled out my big ol’ shears and cut off all the disgusting bug-residue, and threw it away.  For a few minutes, I felt better- the offending area was now gone and it couldn’t infect the rest of the stocking (because in my mind, that’s how moths worked.  Like I said, not my smartest moment).

But my good mood was short lived.  Because the moment I threw away the top of the stocking, I looked at what I had left.  It was not good. 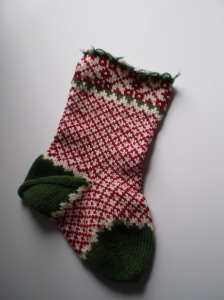 I took a few calming breaths and realized that whatever I needed to do next, I had to get more yarn- after all, I had cut off a good 4 inches, and needed to get that knitting back, one way or another.   I hopped in the car and drove to my favorite yarn shop with the sad, half-dead stocking and picked out the appropriate colors (and thank god they hadn’t been discontinued!).  This was literally a year ago.   (OK- a year and two days.) 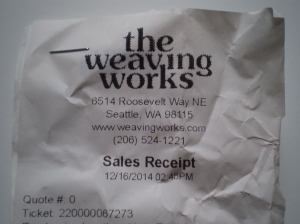 Yarn in hand, half-dead stocking in my knitting bag, did I run home to pick up my needles and go to work?

No.  I panicked some more and hid the project away in my knitting room.

And then forgot about it.

I pulled out the Christmas stuff this year, and when I saw my lone intact stocking in the box of decorations, it all came flooding back to me- the hole, the scissors, the bad decisions.

But, it’s still early(ish) in December, and I’ve mostly finished my Christmas knitting, so I sat down, determined to finally fix the stocking.

First, I considered picking up stitches from the cut-off edge, and knitting up.  But, on second thought, I realized that knitting from the other direction would throw off the Fair Isle pattern I had worked on so carefully.  I had to knit from the top down, like before, then graft the new cuff to the old stocking.

Using the intact stocking as a template, and re-charting the name panel, I worked up the cuff in an afternoon.  It looked good.  It looked like it was going to work.  I just had to figure out how to attach it. 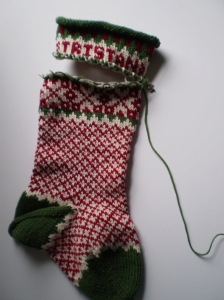 I examined the remains of the original stocking carefully.  I didn’t want to have to graft the top into a row of color work (I am insane, but not that insane).  Luckily, there was a solid row of green right before the snowflake panel, so that was where I decided to make my move.

I carefully lined up the top with the rest of the stocking, and started grafting the live stitches onto the old stocking.

It went slowly, but soon enough i had made it all the way around the cuff!  I did a little happy dance and let out a sigh of relief.

But that relief was short-lived, because now there was a weird giant crease all the way around the cuff where I had just finished grafting.

That picture looks like I’ve just folded the knitting for dramatic effect, but I swear that was how it was laying.

Upon further inspection I realized that since I had grafted a few rows down from where I had cut the stocking in that fit of insect-inspired rage, there was now a big ridge of unwanted knitting inside my stocking.

There was only one thing to do.  Unravel it.  (And cross my fingers that I hadn’t made a mistake in my grafting.)

I picked and pulled and before long, the ridge was gone.

I wove in the remaining ends, and held my breath as I turned the stocking inside-out.

And it was good as new!  A Christmas Miracle!

The stockings are now hung by the chimney with care, and I will be sure to store them in a moth-proof container this year.

Have you ever had to do major reconstructive surgery on a knit item?  How did it go?

I love Christmas. I love the family, I love the gifts, I love the food, and I love the decorations. But, I’m not super-traditional when it comes to decking my halls. Red and green are a little passé, and Rudolph (and his red nose) are old hat. I’m a fan of sparkly tinsel and multicolor blinking lights.

This stocking is just what I look for in a Christmas decoration. It’s festive, but not boring. Traditional…ish. I’ve picked a deep winey red and a pale seafoam green to my delightfully chubby stocking. Experiment with the colors to make one perfect for every member of your family!

The Christmas Scallops Stocking is a simple, fast knit that you can work up in a weekend. It is knit from the top down, in the round, at a largish gauge. A few easy rows of Fair Isle creates the decorative colorwork at cuff and toe. The heel is formed by a simple series of short rows in an easily memorized pattern.  You’ll have plenty of time to finish these stockings before Santa arrives on Christmas Eve.

Get the pattern for free here:

I’m a fiend for tiny things.  It’s been that way since I was a little kid.  (Mom loves tiny stuff, too.  So maybe it’s genetic?)  But, basically, the smaller, the better, and the more useless the better.

Here are a couple fun (and tiny) little projects for you to try out.  They’re great for using up little bits of extra yarn you might have laying around.

Chichester the Pig by Helen Apocalypse (FYI, this little piglet is knit in the round
with no seaming!  No arms or legs to sew on!  That means you have
time to make a whole drift (Drift is the technical term for a group of pigs.  Now you know!).) 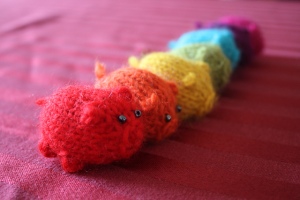 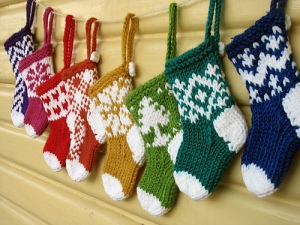