Are you guys watching the new season of The Crown on Netflix? You know me, I’m a sucker for a costume drama- especially one about a royal family that wears a lot of fancy clothes (especially a lot of sweaters).

This season opens with Queen Elizabeth and Prince Philip (though I think he’s still “just” a duke at this point) in the midst of a big fight, like a if-we-weren’t-royalty-we’d-be-getting-a-divorce-right-now fight.  It turns out that Philip is being a big baby about having to play second fiddle to his wife who is literally the Queen of England.  Maybe this is just because I’m a dumb American living in 2017, but Philip’s whole argument is just a bunch of misogynistic whining in my ears.

Anyway, after the fight, there’s a big flashback where Philip goes off on a “tour of the colonies” (blech) that really turns out to be a big 5-month long bachelor party with all sorts of unsuspecting women in the south Pacific (double blech).  Near the end of his tour, his ship visits Antarctica, and he spends a lot of time brooding around the ship, being grumpy that his wife might know what he’s been up to.

While I don’t love Philip, I gotta say, I do love his Antarctican brooding sweater.

It’s a crew-neck pullover with set-in sleeves worked in bulky navy blue with white accents.  It might even have been thrummed, but it’s hard to say.  I like the subtle naval stripes around the collar and cuffs, and the simple over-all pattern.

I’d wear the heck out of that sweater.

Now, I couldn’t find a pattern that exactly matched Philip’s sweater, but you could easily modify a simple sweater pattern if you wanted to make your own.

This sweater has the same feel, if not the same design.  Its all-over rib and raglan shoulders really evoke an old-school sailor feel.  You could use a white-and-navy marled yarn for a similar look to Philip’s sweater.

This sweater would be a great starting point for making your own Philip sweater. It’s the right shape, and has the right shoulders and neckline.  If you worked the yoke in stockinette, and added in some stranded knitting to make the “snowflakes” on Philip’s sweater, you’d get pretty dang close.

If you really wanted to embrace the whole “Antarctica” thing, you could even thrum your sweater (though that might be too much- I’ve never actually seen a thrummed sweater).  Thrumming adds an insane layer of warmth and thickness to garments, and is usually saved for accessories like these super-cozy mittens.

Have you been watching anything good lately?

I’ve been hard at work on Christmas gifts, so I’ve been watching more TV than usual.  (I’ve got one gift left to finish- and it feels like it’s taking forever!)

Lucky for me, I just got to spend 10 hours with the excellent new Netflix show, The Crown.  I love a good costume drama, and this is a good costume drama.  It follows Queen Elizabeth from just before her ascension through to the late 50s (I believe, I’m not great with dates).  It’s a very interesting view into the life of the young queen, her advisors, and her political opponents.  It’s a family drama, a political thriller, and kind of a coming-of-age story, all in one.  And, of course the costumes are gorgeous- the dresses, the jewels, the ridiculous military garb Prince Philip wears.  It’s all amazing.

Of course Queen Elizabeth and Prince Philip don’t wear knitted jumpers to attend to matters of state, but when she’s at home, dealing with the day-to-day of “Queening,” you’d better believe Elizabeth rocks a cardigan (I bet they’re all cashmere, too).

She’s got somber ones for supervising work around the house. 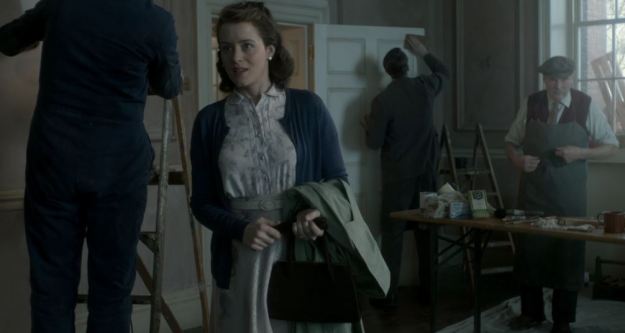 And collared ones for meeting with her advisors.

But they all look quite lovely with a big silk skirt with lots of petticoats.

Want to let your inner Queen Elizabeth shine?  Try one of these royally cute cardi’s:

I love the touch of cables on this one, though the Queen would not approve of the short shorts. 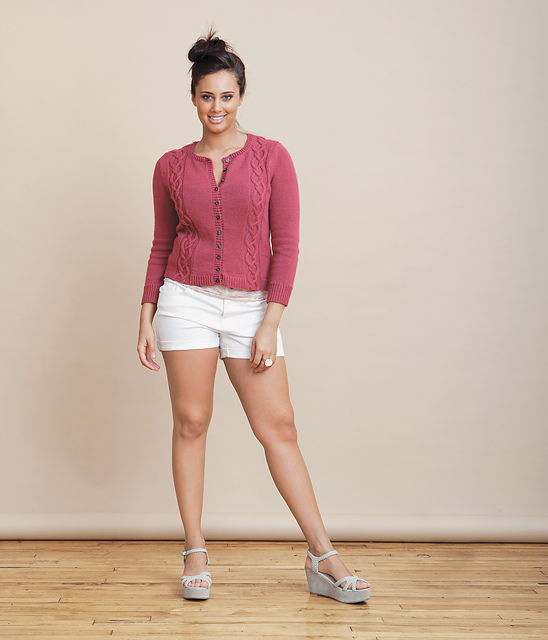 I love the texture on this cardigan, but I think the Queen would think the big flower was a little “common.”  I bet she’d decorate the sweater with a gold-and-diamond brooch from her personal jewelry collection.

I love the little fake peplum at the bottom of this sweater. It might be a little “much” for the queen, though.  She’s got very refined tastes.

Have you watched The Crown?  It’s so good, right?

I may be only 30, but I am a knitter, quilter, and gardener, and when the weather changes, my knee hurts.  So, I think that makes me an honorary old lady.   And this honorary old lady likes Netflix’s show Grace and Frankie.

Have you watched it?  It’s delightful! 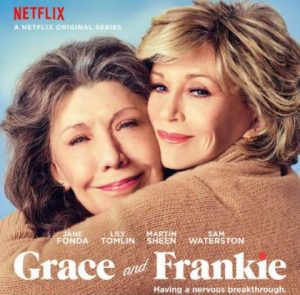 Sure, it’s a fairly standard “odd couple” type of show, but it is actually really fun and fresh-feeling.  First of all, it stars two *gasp* women (in their *double gasp* 70s!) and they are totally amazing.  Lily Tomlin steals the show as hippy-dippy Frankie.  And Jane Fonda steals it right back as uptight ex-business maven Grace.  The two unlikely friends end up living together (because of complicated reasons involving their husbands leaving them to get married to each other), and figuring out what life is like living on their own.

It’s a funny show, but it’s also sweet and heartfelt (and has even made stoic old me cry a couple times).

Grace hasn’t met a starched collar she didn’t like, and I think Frankie must shop in the ‘woodland sprite’ section of Macy’s.  They both always look amazing, and in totally different ways.

Grace rocks a selection of jackets and pantsuits that leave even me (who thinks wearing my “nice flannel shirt” is dressing up) with an itch to go shopping. 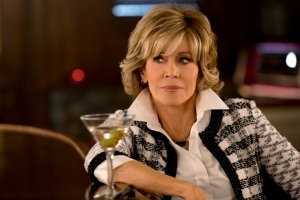 If she were to ask for a knit garment, you’d be sure it’d be a structured cardigan like this one, complete with shoulder pads and princess seaming. 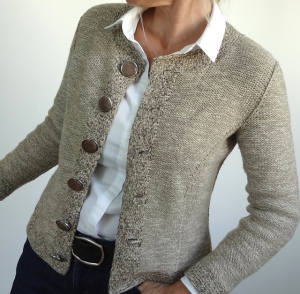 On the other hand, Frankie loves to play with flowy fabrics and interesting silhouettes.  Nothing makes it into her wardrobe without a beautiful print or a gorgeous color. 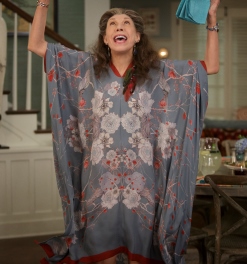 She’d love to try something a little out-of-the-box, like this really cool tunic, complete with an interesting hemline and pockets.  I think she’d wear it with a really huge crystal statement necklace and some sort of billowy, peasant skirt.

Have you watched Grace and Frankie?  What did you think of it?