I did the thing the other day (and don’t act like you haven’t done it) where I was buying some yarn  from KnitPicks, and I was this close to $50, so I had to buy myself a little present to get the free shipping (even though the shipping probably cost less than the present… But it’s the principle).

Well, I was browsing the books, and would you believe it?  There was a Clangers knitting book!!!  And it was only 7 bucks!

What’s that?  You don’t know about the clangers?

Well, clearly you never were a kid in British public school.   We lived in Essex for a few years when I was in elementary school, and they showed old VHS tapes of The Clangers when they didn’t feel like teachign.

The Clangers was a kids’ BBC show from the late-60s/early-70s (which explains everything) about a family of knitted, pink, mouse-like creatures that live on a tiny, papier-mache moon and eat soup (cooked by the Soup Dragon-obviously) and blue string pudding.  They don’t talk, instead they communicate by whistling.  Also there’s the robotic Iron Chicken and tiny Froglets, who live in the center of the moon in a pool of pink soup.

It all makes sense.

Maybe watching an episode will make it clear:

But, still, there’ll always be a spot in my heart for The Clangers, and a spot on my bookshelf for this knitting book.

Have you ever revisited something from your childhood that you thought was great, but turned out to be… well… not?

Everyone (at least in the US), knows Mr. Rogers, and his beautiful kids’ TV show, Mr. Rogers’ Neighborhood.

Each episode begins with Mr. Rogers entering his house, changing his shoes and zipping up (or buttoning up) a cardigan sweater while singing “Won’t You Be My Neighbor?”  (I still know all the words more than 20 years after I last saw the show.)

But, did you know that all (or at least, nearly all) his sweaters were knit by hand by his mother, Nancy Rogers?  How wonderful is that?   It totally makes sense.  Of course Mr. Rogers wore sweaters knit by his mother!

One of her sweaters has even ended up in the Smithsonian.   You can visit it in D. C. next time you’re there to pay respects to Mrs. Rogers. 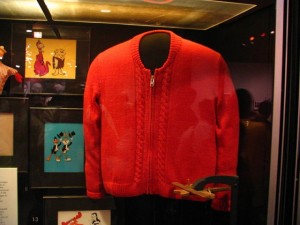 And, one of the most famous Mr. Rogers quotes (at least it pops up on my Facebook feed most frequently) is about his mother:

“When I was a boy and I would see scary things in the news, my mother would say to me, ‘Look for the helpers. You will always find people who are helping.” — Mister Rogers

Mr. Rogers’ mother must have been a pretty amazing lady.  So let’s raise our knitting needles to Nancy Rogers (and all the other amazing mothers) this Sunday while we celebrate Mothers’ Day!

(And Happy Mothers’ day to all you mothers out there on the internet!  Especially Mom, Grandma, and Kris (my Mother-in-Law)!)