I did the thing the other day (and don’t act like you haven’t done it) where I was buying some yarn  from KnitPicks, and I was this close to $50, so I had to buy myself a little present to get the free shipping (even though the shipping probably cost less than the present… But it’s the principle).

Well, I was browsing the books, and would you believe it?  There was a Clangers knitting book!!!  And it was only 7 bucks!

What’s that?  You don’t know about the clangers?

Well, clearly you never were a kid in British public school.   We lived in Essex for a few years when I was in elementary school, and they showed old VHS tapes of The Clangers when they didn’t feel like teachign.

The Clangers was a kids’ BBC show from the late-60s/early-70s (which explains everything) about a family of knitted, pink, mouse-like creatures that live on a tiny, papier-mache moon and eat soup (cooked by the Soup Dragon-obviously) and blue string pudding.  They don’t talk, instead they communicate by whistling.  Also there’s the robotic Iron Chicken and tiny Froglets, who live in the center of the moon in a pool of pink soup. 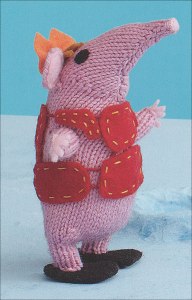 It all makes sense.

Maybe watching an episode will make it clear:

But, still, there’ll always be a spot in my heart for The Clangers, and a spot on my bookshelf for this knitting book.

Have you ever revisited something from your childhood that you thought was great, but turned out to be… well… not?