I watch quite a bit of TV and more than a few movies, I admit.  But, what else am I supposed to do while I knit?  Honestly.

Divergent is a less-coherent cousin to the Hunger Games.  It’s not terrible, but it’s not great cinema.  If you look at it a little too closely, it kind of stops making sense.

So, in a not-so-distant future where America has become a post-apocolyptic wasteland, the last bastion of civilization is Chicago.  (Because… who knows.)  In Future Chicago, everyone has been divided up into five factions (they all have names, but I don’t remember them. In my head, they’re “The Smart Ones,” “The Bad Asses,” “The Truth-y Folks,” “The People Who Take Giving To Charity A Little Too Seriously,” and “The Fifth Group That I’ve Forgotten About.”).  When kids in Future Chicago come of age, they take a very complicated test that involves mind control and hallucinogenic drugs (because Science Fiction) which sorts them into the faction that’s right for them.  (Think: Harry Potter meets The Giver, but more complicated.)  The heroine ends up getting a result that says she could belong to any faction, and she has to go into hiding because Kate Winslet wants to kill her.  Or something.

And this all happens in the first 20 minutes of a more than 2-hour movie.

Like I said-it’s not great with the logic.  (Which is a shame.  I always root for good sci-fi with female leads.)  But, it does have some great knitwear.

Look at this sweater that the main character wears during her hallucinogen-fueled Sorting Ceremony.  From the front, it’s a light, simple pullover.

From the back, it’s totally cool and modern.

You could totally wear a light sweater like this over jeans and a tank-top, or with a sundress.  It would be a perfect coverup for chilly summer nights, or a nice, thin layer under a denim jacket in the fall.

I’m kind of in love (and I don’t even like angora).

I couldn’t find a perfect match to the Divergent sweater, but these could come close with a few tweaks. 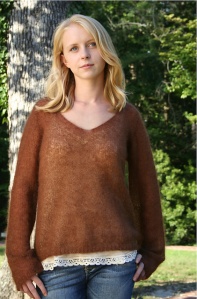 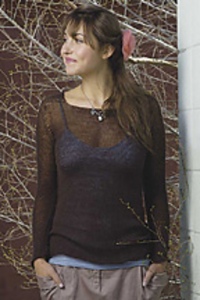 Have you seen Divergent?  What did you think?