I’ve mentioned my tradition of making blankets for couples getting married.  Well, it’s come back to bite me in the butt again.  I’ve got two weddings coming up in the next couple months, and I haven’t even planned out a project yet, much less started knitting either one.

Here’s what I’m thinking:  Something quick and cozy, with a bulky yarn and gigantic needles.   Which of these do you like?

I like this one, it’s knit with bulky yarn held double.  But I think we could go bigger.

This one has a gauge of 3 stitches per 4 inches.  That would just about fly off the needles.  But what if we went Even BIGGER?

Instead of needles… PVC pipes.  Instead of Yarn… slightly felted roving.  This might be the one.  Can you imagine cuddling up on the couch with this blanket?  It would be like living in a little cocoon of fluff.  Heaven. 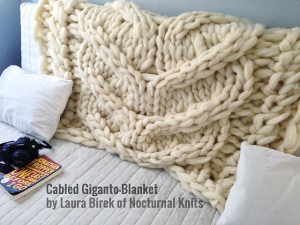 Or, I suppose I could just get something off their registries… but where’s the fun in that?