I’ve never been one to do home repair.  I know I’ve got plenty of DIY skills, but I also know that I don’t have the kind of skills to, say, lay tile or re-hang a door or renovate a kitchen.

I do, however, have the skills to renovate a play kitchen!

(FYI, this is going to be a long one.  And there isn’t going to be any knitting involved.  You have been warned.)

Anyway, we had been thinking that our kid would appreciate a play kitchen for a while.  After all, one of his favorite things to do is to pull out pots and pans from our cupboards, pretend to stir something (usually puzzle pieces or pompoms) with a wooden spoon.  He’ll then repeatedly say “Cook!  Cook!” until someone acknowledges what he’s doing and takes a “taste.”  It’s very sweet.

Now, as you know, I’m an elaborator.  I could just buy a play kitchen, but no!  I had to do something fancy.  I started my search for a used play kitchen that needed a makeover.  I tried the kid’s consignment shops, Goodwill, I even looked on Craigslist.  And I didn’t find anything that really spoke to me.

But, then, driving home from a playdate, I saw it- on the side of the road.  A really nice home-made play kitchen that needed a little TLC!  It was fate!  A free kitchen!  Right there, less than a half a block from my house!

I hopped out and tried to shove it in the back of my car before the kid realized I wasn’t going to let him out of his car seat.  I couldn’t close the trunk, but it was only a half a block, and my kid was losing it, so I figured I could make it to the house if I just drove carefully.

Well, I immediately hit a pothole and the kitchen fell out the back of my car and busted into about fifteen pieces.

The kid was completely beyond reason at this point, I had smashed a play kitchen across the street (right in front of the previous owner’s house, I might add), and several neighbors had definitely seen what I had done.  Not my best moment.  Luckily, a neighbor stepped up and helped me load the pieces back in my trunk (and let me borrow some bungee cords).

Long story short, I got everything home and got the baby calmed down.  And, now I had a bigger project than I had expected.

Clearly this play kitchen had started life as a TV stand and some extra lumber, and someone’s very talented grandparent had converted it into a kitchen.

I got to work, taking off the hardware, removing the DVD “burners”, and sanding all the pieces.  I bought a new faucet, paint and some nails and came up with a plan.

First thing, I reassembled the shelves and put the counter top back in place.  (I thought about waiting until after the pieces were painted, but I’m glad I didn’t.  Turns out I’m very bad at driving nails, and I would have totally ruined the paint if I’d done it the other way around.) 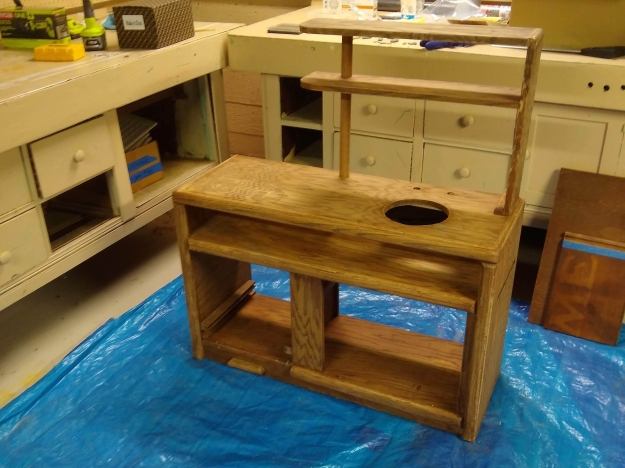 Then a few coats of paint.  (The green looks distinctly more avocado than I had envisioned.  It took a while, but it’s growing on me.)

Then I broke out the painter’s tape and added in green details on the shelves, cook top and the side.  It really was starting to look good!

Then I installed the new faucet (which was definitely easier than installing a real faucet), put back the doors (which was more difficult than I had imagined- one of the hinges must have gotten bent in accident, and didn’t want to shut all the way), and cut a piece of plastic for the oven door (that I installed with some truly toxic-smelling glue).

Then it was time for the last few details- burners made from painted wood circles and cut-up tongue depressors, some chalkboard paint for the “menu,” a new sink, and a hook to hold a kid-sized apron.  Then the grandparents supplied the kitchen with lots of adorable pots and pans, baby cookbooks, and my mom sewed a huge basket of felt food

Then all that was left was a big red bow on top, and we were ready for Christmas morning!

I’m happy to say, he loved it!

I think it was the big winner this year (well, at least until he opened up the beeping, flashing trucks from his great-grandpa).

It was a really fun, and something so different from my usual projects.  I really enjoyed putting it together!

Did you do any Christmas crafting?