I’ve gotta admit- it’s been a while since I enjoyed a pattern this much.  Part of it might be the speed of the knit; a sweater without (much of) a body or sleeves isn’t going to take long.  It might be the simple, yet super effective colorwork.  I’ve yet to see a version of Soldotna that doesn’t work.  And it might be that it’s one of the most flattering sweaters I’ve finished in a long time.

I actually bound off several weeks ago, while we were on vacation up on the Sound.  I even blocked it in the sun, overlooking the water. (Blocking with a view makes the finished project better, right?) 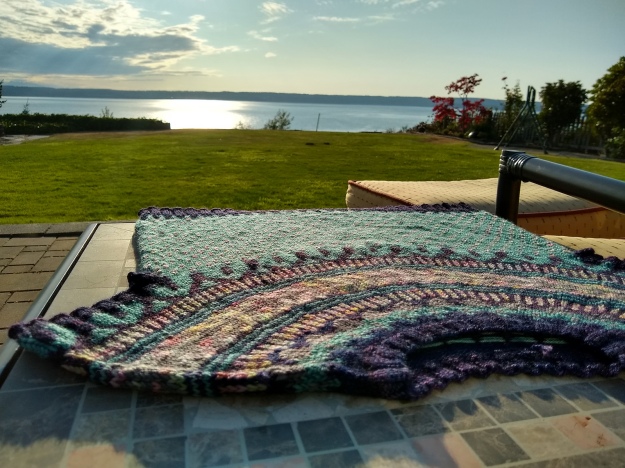 I think my favorite part of this sweater is how wearable it is.  Who would have thought? A short-sleeved, cropped sweater? Really?  Past Allison would have laughed at the idea that I would wear something like this.

But, look at it!  It’s great!  (Ollie seems less than impressed, but that might be because I’m not feeding him treats.)

I’ve been wearing it over dresses, tank-tops and jeans.  And once it cools down (fall’s right around the corner), I think it’ll be cute over long-sleeved tanks or a nice buttondown.

The kid seems like he likes it too. (How cute would a baby one be?!)

Have you finished anything fun recently?