No, silly, not the Olympic games.

(Although I am excited to see some synchronized swimming and rhythmic gymnastics.)

No, I’m talking about the Ravellenic Games!

This’ll be my second time participating.  Last time (Winter 2014), I made a sweater.  It was pretty great (the sweater, not this photo).  I actually still wear it quite a bit. 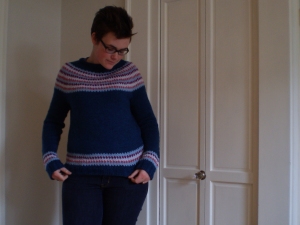 (If you’re considering taking part, join the Ravellenic Games group on Ravelry.  It’s essentially a big, friendly knit-a-long where everyone casts on at the same time (7:15 Rio time on the 5th), when the Olympic games start.  Then, you see how much you can get done before the end of the games, two weeks later.  There are a lot of rules and teams and stuff, but I plan on ignoring most of that, because I’m a rebel. Ha.)

Last time, I planned out my project weeks ahead of time, maybe even months.  This time I’m flying by the seat of my pants.  Looking at the list of “Events,” I’m thinking I might participate in the Sock-Put, the Sweater Triathalon, or the WIP Wrestling (I’ve got a stack of half-finished projects that need to be finished).  Maybe I’ll do Garment Polo- I’ve been thinking about making a cabled skirt (because apparently I want everything I wear to be cabled).

We’re going on a road trip during the Olympics, so I’ll have lots of time to knit, but I also don’t want my project to be too fiddly (I get carsick if I spend too much time looking at my knitting).  I’m thinking something with a lot of stockinette or garter stitch.

Any suggestions?  Do you think you’ll be taking part in the Ravellenic Games?  What events will you be joining?