On my Epic Road Trip, I spent a day with my in-laws, visiting the Rock and Roll Hall of Fame in Cleveland, Ohio. 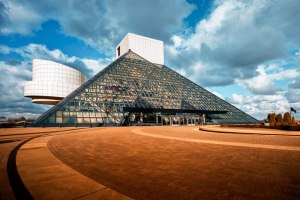 I’ll be honest, I was kind of “meh” on the idea of stopping by, after all I’m not a huge fan of classic rock.  But, I really enjoyed myself!  I saw Michael Jackson’s rhinestone glove, the Supremes’ pink sequin-and-feather dresses, and the white guitar that Jimi Hendrix played at Woodstock.  There was a fantastic exhibit about the history of rock (starting with blues and jazz through modern day) and a cool display talking about the intersection of politics and music.  I’d definitely recommend stopping for a day (or at lest an afternoon), if you’re driving through Ohio.

“But Allison,” you ask.  “Why are you talking about the Rock and Roll Hall of Fame on a knitting blog?”

One of the newest inductees to the Hall of Fame is the band Cheap Trick. 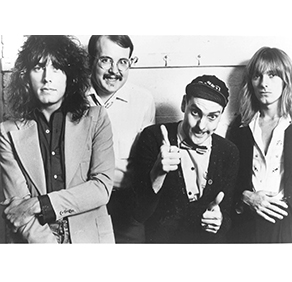 And in the display about the new inductees, was one of the outfits that Rick Nielsen, the guitarist wore at a bunch of his shows.

It’s hard to see in such a small picture, but that cardigan… it’s knit.  Black and white checkers at a tiny gauge (I think it’s double knit, but I couldn’t get close enough to really examine it).  And the two big black squares on the front are giant pockets with “Cheap Trick” worked over and over again in white.  Can you imagine knitting something like that… it’s such a small gauge, and would be such a pain to knit!.  (And can you imagine performing on stage under all those hot lights in a wool cardigan?  Ugh!)

According to the plaque, Rick Nielsen designed the sweater and someone named Sally Walton knit it up.    It might not be my style, but it’s a pretty impressive piece of knitting.  Imagine one of your finished objects ending up in a museum!

What’s the most surprising knitting you’ve come across?