Last weekend I went to a fun little knitting convention in Seattle, and I did something awesome that I’ve never one before! 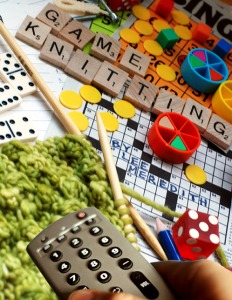 Game Knitting was originally developed by Lee Meredith of Leethal Knits, and it’s a super fun, goofy way to knit.

You pop on a favorite movie (or TV show, or podcast, or audio book), and get ready to knit.  Then, decide what “thing” you’re going to watch for.  Maybe you’re watching Law and Order and you listen for each time the soundtrack goes “chung chung!” Or, if you’re listening to a Harry Potter book, you could look for each time they say the word “magic.”  Basically, think about it like you’re doing a drinking game, but if you were actually drinking, you would end up in the hospital for alcohol poisoning in about fifteen minutes.

Anyway, we watched Clueless (one of my favorites)! And we had a whole list of “things:”  90s slang, crazy hats, baggy pants, Paul Rudd, giant cell phones etc. 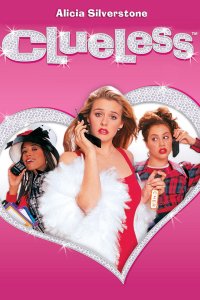 So, once you’ve picked your “thing” and you’ve got your yarn and needles, start knitting something small and simple.  There were folks making hats, mitts, coffee cozies, and washcloths.  I decided to make a simple garter stitch scarf with my hand-spun multi-color yarn.

Then, every time you come across your “thing” you do something to change your knitting.  I switched from knitting to purling.  Some people added a yo/k2tog eyelet, some people knit a bobble or switched colors. 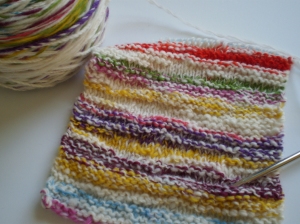 My scarf (or at least the first 6 inches of it) is super cute and squishy.  The random knit/purl pattern is great with my less-than-perfect handspun, and is going to be an adorable winter accessory.  (And a great excuse to watch more movies!)

Basically, it’s a simple knitting recipe for when you want to make something silly and fun!  I love it!

Would you ever try Game Knitting?  What movie would you watch?  What would your “thing” be?