In honor of NaNoWriMo, I thought we could talk about books and novels.  Specifically, knitting in books and novels.  Sometimes it’s a sneaky, subtle part of a book, and sometimes it seems like it’s almost a main character.  I don’t know about you, but whenever I come across a mention of knitting in a book, I always get excited, as if I just saw an old friend make a cameo.

So, without much more ado, let’s jump right in to my favorite book series of all time. Harry Potter (obviously)!

Knitting isn’t a big part of these books, but it peeks its wooly head up more than a few times.

In the first book, when Harry is first being introduced to the wizarding world, Hagrid breaks out his tent-like yellow knitting on the journey.  (Just like all of us trying to pass the time on a long commute.)

Mrs. Weasley is a well-known (and prolific) knitter, who spends her days knitting sweaters for her seven children (plus Harry).   (Sure, they’re a little tacky, and the kids don’t really appreciate them the way they should, but it’s the thought that counts, right?) 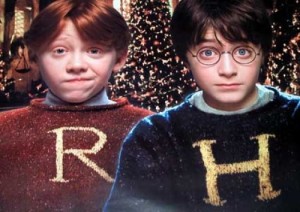 Hermione even learns a knitting charm to help her knit the piles of hats that she tries to use to set the Hogwarts house elves free.  (Can you imagine how much more you could get done if you could use a knitting charm? My whole house would probably end up covered by a gigantic knitted house-cozy.)

And, even Professor Dumbledore, while not a knitter himself, is a big fan of the art.  More than once, he mentions his love of warm woolen socks, and once he reads a muggle knitting magazine while waiting for a couple other characters to finish a conversation.

Clearly, I have read (and re-read) the Harry Potter books a few too many times, but, you know what?  I don’t care!  They’re fun, interesting, well-written, clever, and have lots and lots of knitting in them.