Do you remember Grandma Anna’s Counterpane?  I spent hours reverse-engineering one of my great-grandmother’s bedspreads from a little snapshot my Mom sent me.  I even posted a pattern.

It turns out, I didn’t have to.  (Insert sad noise here.)

I received a package from a great-aunt a few weeks ago (one that also included a few of my great-grandmother’s crochet hooks).  In the package was also a couple of my grandmother’s old craft magazines.

This booklet, the Learn How Book, was published in 1952 by Coats & Clark.  It has a few simple projects and extremely thorough instructions on crochet, knitting, embroidery and (very usefully) tatting.  (The projects are actually pretty and practical, especially considering the publication date.  There’s even a sweater that I would totally make for myself, if I wore a girdle.)

But, right at the end of the crochet section, something popped out at me and literally made me do a double take. 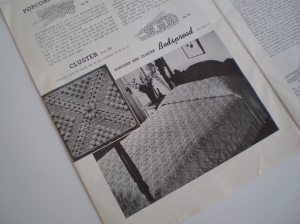 It even used the word “cluster” for the bunches of stitches, just like I did.  Weird, right?  (Sure, the big clusters were called popcorn stitches in this pattern, but hey.  Close enough.)

I scanned through the pattern, and it looks like we both did mostly the same things, which is amazing.  Although, it’s a little hard to read the pattern in the booklet… look at that block of text!

The biggest difference I saw, though, was that they used a much, much finer gauge on their bedspread than I did.  I used a size H crochet hook, which is about 5 mm in diameter.  The booklet calls for a size 7 steel crochet hook, which is super tiny!  It’s actually less than 2 mm in diameter.  That means that instead of the blocks being about 10 inches across, like mine turned out, the original counterpane squares were only 5 inches by 5 inches!  That means, if you’re following the original pattern, you’ll need 260 squares just to make a twin-bed-sized blanket.  Talk about dedication!

I’m glad I got to see the original pattern, and I love seeing my great-grandmother’s old-fashioned handwriting in the margins of some of the patterns.  But one thing is for sure, I definitely won’t be making this bedspread at the original gauge.  That’s just crazy!

7 thoughts on “Whoops! A Counterpane Follow-up”