At E3 this year (the big video game conference, where all the big names in video games get together and show off their new products) a new game in the Mario franchise was released: Yoshi’s Woolly World!

It’s a Mario game, with Yoshi the dinosaur (dragon?  I’m not sure) as the protagonist.  And for some reason everything in the game is knit, crocheted or otherwise made out of stuff you’d find at Micheal’s.  I’ve tried to figure out why they picked wool as their decorative medium, and I cant’ figure it out.  It does look cool though. 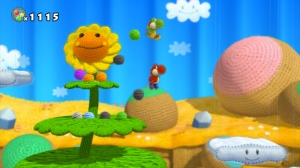 Look!  The clouds are made of felt, the big flower is crocheted, the grass is knitted, and even Yoshi himself is made of wool.

I don’t quite understand it, but I don’t really care.  It’s cute and funny (and fuzzy).  I might even have to go buy a WiiU when this game comes out next year.

Celebrate Yoshi’s Woolly World with a woolly Yoshi of your own: