Peggy Sue is dead.  (Not the person, the cardigan.)  I tried to fix it.  I wanted the pattern to work so much!  But, alas, it was not meant to be.  I started off with the wrong gauge (I knew this was going to happen.  I took a swatch and everything.  I’m just dumb.), and didn’t compensate accordingly.  My sweater was turning out much too small.  I got all the way to the armpits (it’s a top-down sweater) before I realized the error of my ways.

I ripped it out, and tried again on bigger needles, but the fabric just didn’t look right.  This time I only got halfway through the shoulders (thank goodness). I ripped it out again.

Then I got pissed and threw it in a corner of my craft closet.  It sat there for a while gathering dust while I sulked.

Now, I’m knitting up my pretty blue yarn again.  It’s still going to be a girly blue cardigan, but this time I’m sort of making my own pattern.  I’m using my new favorite sweater book, the Knitter’s Handy Book of Top-Down Sweaters.  It’s a Seamless Yoke Cardigan, based in part on her Feather and Fan Flare sweater.  It’s at a nice fine gauge (or at least fine compared to sweaters I’ve made before).  I like to make my sweaters with chunky yarn and big needles, but I wanted this sweater to turn out a little fancier and girlier than my usual projects).  But, instead of the fussy little cables on Peggy Sue, I’m using decorative increases and garter ridges around the yoke, hem and cuffs.  And, since it’s a yoke sweater, not a raglan, I think it will be more flattering on me. 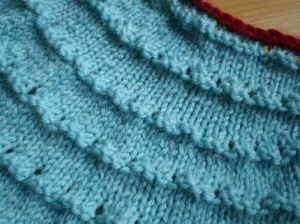 The funny thing is, though, that now that I’ve got it growing on my needles, I really like the contrast between the red yarn of my provisional cast-on and the pale aqua blue.  It’s making me think that I want to use red or maroon buttons on the sweater.  Which is ridiculous, since the whole point of making this sweater in the first place was to use my pretty blue buttons.

But, I suppose that takes me back to my original point: It’s important to stay flexible when you’re knitting.  It’s so easy to get bogged down in the details, and keep slogging through a project that you no longer love, or something that you figure out won’t work for you.  And, it’s so hard to abandon a project that you’ve poured hours and hours of your life into. But, it’s so much more satisfying (and fun!) to make something that you love than to slave away, determined to finish the project as you planned in the beginning.  Just because you start on a project, doesn’t mean that it’s the one you have to finish.

How have you had to be flexible when you work on a project?

1 thought on “Going with the Flow”