I must have mentioned at some point that I’m a huge Harry Potter nerd.  It’s true.  And I’m not one bit ashamed of it.  I’ve probably read through the books at least five or six times.  I even dressed up with my friends to go to the midnight release of one of the last book.  Then we all sat up until dawn reading.  Good times.

One of my nerdier purchases (which is saying something), is my well-used copy of Charmed Knits, by Alison Hansel.  It’s an unofficial Harry Potter knitting book, and it is utterly delightful. 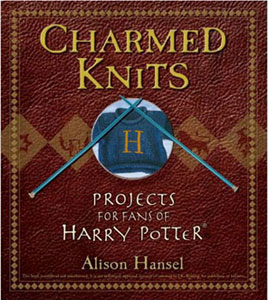 If you’ve read the books, you know that Mrs. Weasley knits sweaters for each of her seven children every Christmas.  And, if you’re a knitter, you know what an undertaking that must be (even with the help of magic!).  It’s one of the ways she demonstrates how much she loves her family and how much pride she takes in protecting them.

In Charmed Knits, Alison Hansel has two patterns.  One pattern is for a full-sized Weasley sweater (with sizes running from toddler all the way up to adult XXL).  The other is for a miniature, Barbie-doll sized sweater.  She suggests bending a bit of wire into a teensy coat hanger to turn your tiny sweater into a Christmas ornament.  (It’s pretty much the most adorable thing ever.)  I’ve made both the full sized sweater (minus the big double-stitched letter on the front; I’m a nerd, but not that much of a nerd) and at least a half dozen mini sweaters. 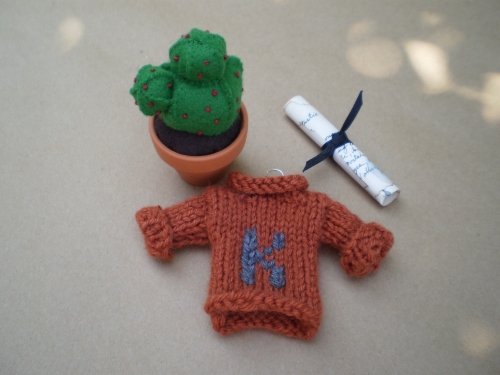 (This is a mini-Weasley sweater I made for my friend Kate’s Harry Potter-themed 29th birthday party.  Also pictured, a felt Mimbulus mimbletonia and a scroll with a magic incantation.  Like I said, I’m a nerd.)

The coolest thing about these two patterns?  They are constructed in exactly the same way.  So, if you’re worried about making your first sweater, why not try knitting up a mini Weasley sweater first, to see how everything fits together before you go?  The two patterns are great beginning sweater patterns; simple, and knit at a largish gauge to make the projects go quickly.

So go find a copy of Charmed Knits, and make your family some sweaters for Christmas.