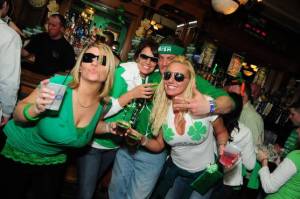 Aran Sweaters are gorgeous and so cozy.  They are traditionally made on the Aran Islands, located off the west coast of Ireland.  And with most traditional crafts, they live in a fog of tradition and old wives’ tales.   Supposedly, they were supposedly knitted in untreated wool for fishermen by their wives.  They left the lanolin on the wool to add an extra water-proofing layer.  (I suppose this makes sense, but can you imagine the stink of a fishing boat full of people in unwashed wool sweaters?  Ugh!)

Some people say that families (or individual knitters) each had traditional motifs that they would use on each sweater.  I’m sure there’s some truth to this.  Everyone has patterns they gravitate to and patterns they can’t stomach.  But, as a knitter who gets bored when she has to make a second sock, I can’t imagine that someone would tie them self to making sweaters with the same pattern over and over forever.

My favorite piece of lore surrounding the Aran sweater is the idea that each motif has a symbolic meaning.  I don’t know how true it is, but it’s a great thought.  The traditional honeycomb pattern  means “hard work”, cables mean “safety,” and diamonds mean “prosperity.”  It’s like the sweater is a good luck charm for your family member to wear, which is an idea I really like.

Want to try your hand at Aran knitting?  Here are a couple (more or less traditional) patterns: 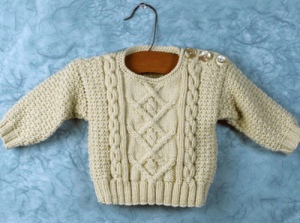